Airlocks and blow-off tubes have the same purpose when it comes to home brewing. They are the necessary equipment to keep your fermentation going smoothly.

But since the purpose is the same, people get confused about them easily. So don’t worry, you’re not the first one to get confused over these two elements.

Maybe you’re thinking about which one is better between the blow-off tube vs airlock?

In blow-off tubes vs airlock, it’s a lot safer to use blow-off tubes. Especially for bigger and stronger fermentations. When the fermentation is at its peak the pressure is also high. An airlock might not be enough to handle such pressure. Using a blow-off tube will give a safer outcome.

That was the answer you were looking for. If you want to find out the reason behind it, keep reading our later segments. Let’s begin!

Quick Comparison: Blow Off Vs Airlock

Before we launch into serious discussions, let’s take a look at this table. It’ll give you some basic ideas on what to expect from today’s discussion.

Done already? Then let’s go over our main discussion now.

Detailed Comparison: Blow Off Vs Airlock

Since blow-off and airlock are used for the same reason, it’s easy to get confused. But you can still determine which one you need if you go through these details-

Airlock and blow-off tubes come in different sizes. First of all, blow-off tubes are bigger in size than airlock pieces. It’s a long piece of plastic tubing that links up the carboy with another bucket.

On the other hand, the airlock is set on the lead of the container. Whether you use a carboy or a container it’ll sit on the lead. Airlocks come in two different shapes.

One is a 3-piece airlock, another is an S-shaped airlock. There’s not much usability difference in both designs. Both are used for the same purpose. Depending on your container size you can buy different sizes of these two designs.

The blow-off tube on the other side has no other design. But it does come in varieties of length and width. You can pick the sizing by measuring your container. So both have different options available for you.

A lot of people may tell you that you won’t need a wine airlock system. Or that a blow-off tube set up is not necessary. But trust me when I say that it’ll make your wine brewing a lot easier.

Firstly, it’s because of the greasy mess that you’ve to clean up due to fermentation. It’s one of the common brewing problems to look out for. An airlock or blow-off tube will save you from that hassle.

But the question is which one would be easier to use?

An airlock is very easy to use. You just have to pick the right-sized airlock that is airtight with the opening. Once you set it, it’ll do the work by itself. Sounds easy right?

So is using a blow-off tube. Insert one end of the tube on the lead. Put the other end into a bucket half-filled with water or sanitizer. Once the cider stops fermenting the job is done.

So, if both are easy to use then which one to go for?

I would say blow-off tube. Although an airlock is extremely easy to use. it’s not so user-friendly when it gets clogged up. It’ll just stop working unless you clean it properly. 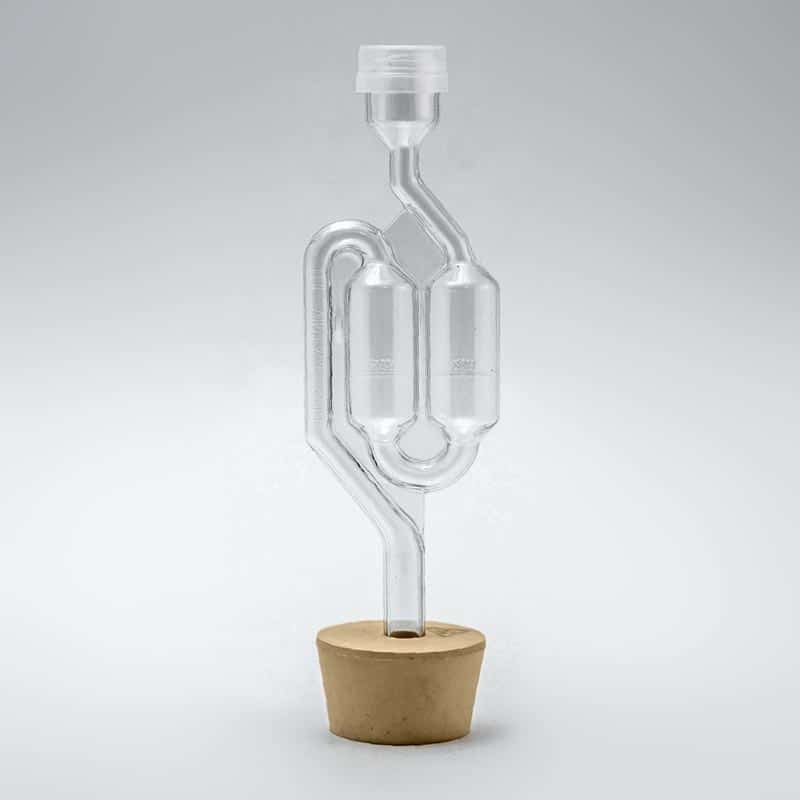 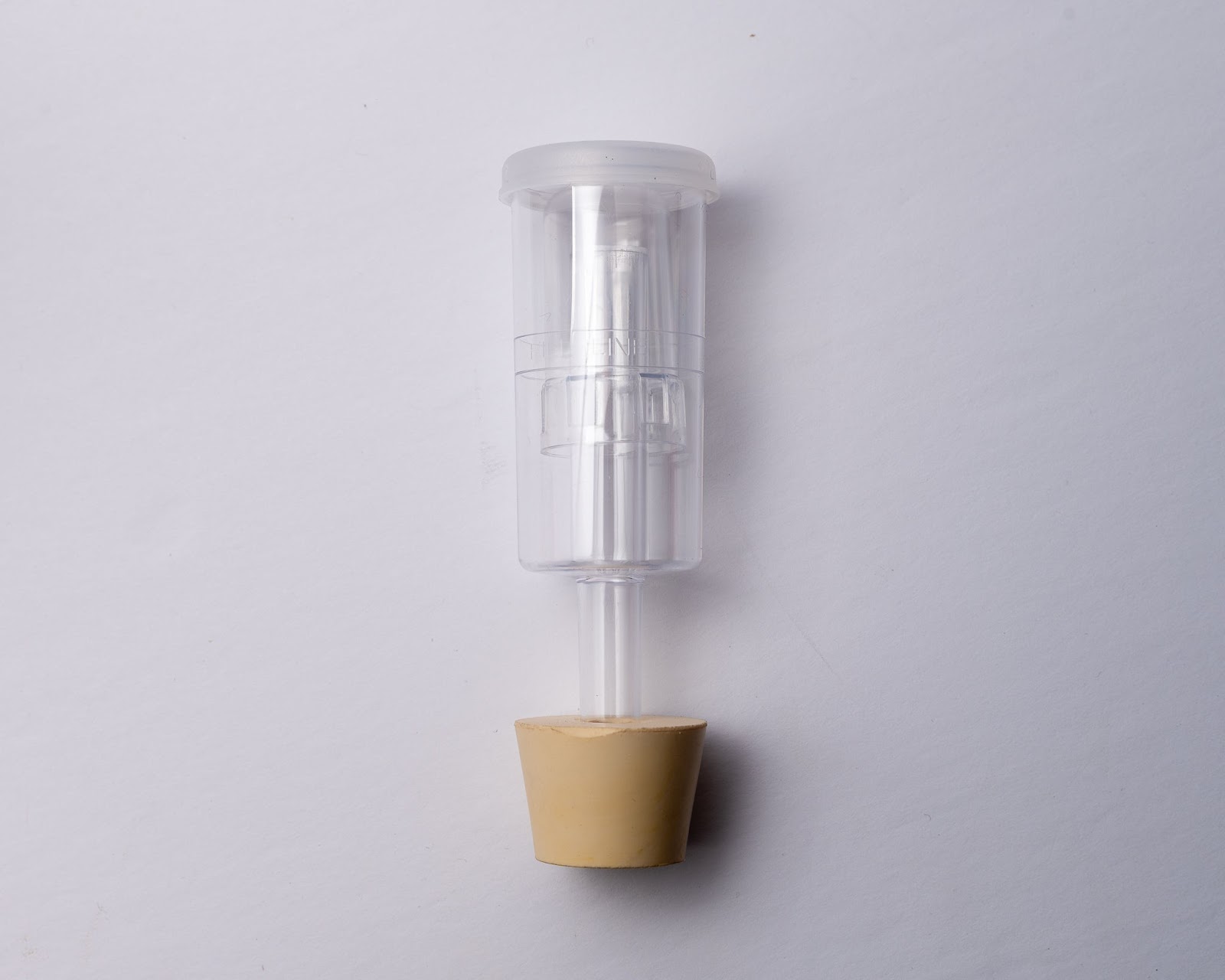 And in some cases, it can’t even be cleaned.

But the blow-off tube has no such complexities. It may take more space and an extra bucket, but it’s also very user-friendly.

This makes blow-off tube brewing a safer option as well. Just make sure the water or sanitizer level is lower than the lead end. 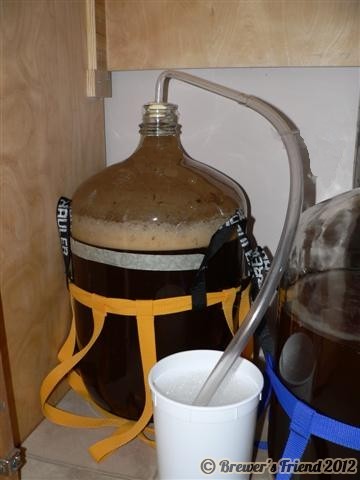 The cleaning procedure of the airlock is complex due to its shape. 3-piece airlocks are comparatively less complex to clean. We used the FastRack 3 Piece Airlock. And, a pipe cleaner is all that we needed. You can also disassemble it when cleaning.

But not for S-shaped ones. It’s complex to clean and you can’t even use a pipe cleaner for it. It easily gets clogged. It’s something similar that you face when beer doesn’t come out of the keg.

A blow-off tube, on the other hand, is much easier to clean than both S-shaped and 3 piece airlocks. But we must admit that you may need a long pipe cleaner for it. But, at least it’s not of a complex shape.

For bigger-scale homebrew airlock fermentation is not that efficient. The same goes for those with aggressive fermentation processes. If the chemical reaction is strong, airlock homebrew might not be the best choice.

It may save you from a bigger mess. But it’s better to go for a blow-off tube homebrew. These tubes are designed to tackle aggressive fermentations of your home brewing. It’s also better in terms of usage with bigger carboys.

So, for large-scale production with aggressive fermentation, blow-off tubes are the ones to go with. For blow-off tubes, we have gathered some recommendations.

Final Verdict: Blow Off Or Airlock?

You might already know the result by now. It is the blow-off tube that we offer our crown to. Because it’s safer, easier to use and clean, and comes in varieties of sizes.

Whether your brewing goes on a bigger or smaller scale it’s usable on both.

But that doesn’t mean we won’t give any credit to airlocks.

An airlock is also good if you use it for smaller-scale brewing. So, if you’re planning on using an airlock, use it for less aggressive fermentations.

Here is our recommendation for both S-type and 3-Piece airlocks.

It’s hard to cover all the necessary information all in the same space. But we’ve still given it a shot. Maybe these answers might help.

Can I switch to airlocks from using a blow-off tube?

Do I have to fill the airlock with water?

Yes, for a three-piece airlock the water should cover at least halfway through it. It is to prevent air from entering the fermenter. For an S-shaped airlock, fill one-third part of it with water. If you see the water level isn’t moving for a long time change the airlock.

What liquid is best to use in airlocks?

For airlocks, filtered water or bottled spring water are mostly recommended. You can also use vodka instead of water. It helps to keep the airlock sanitized. But unlike blow-off tubes, using straight sanitizer is not recommended for airlocks. Use distilled water instead.

That was all from our side about blow-off tube vs airlock. Hopefully, you were able to make your decision from this.

No matter which one you go for, make sure you’re using it properly. Also, don’t give excess water to sanitizers. Follow the user guidelines appropriately.

See you next time!